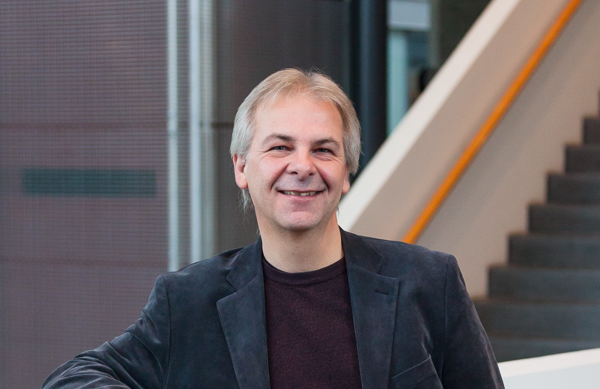 Michael Boy started his professorship at the University of Helsinki and LUT University this fall. The keynote speaker of the upcoming Lahti Science Day seeks solutions to global warming and air pollution by adding new machine learning and AI elements to atmospheric modeling.

Aerosols are everywhere in the air. They have a major role to play in a range of phenomena from clouds to temperature and health. Professor Michael Boy studies them as a member of both University of Helsinki’s Institute for Atmospheric and Earth System Research (INAR) and LUT School of Engineering Science.

“Atmospheric aerosols are particles that are 100 to 10 000 times smaller than the diameter of hair. The concentration in the atmosphere is in the range of hundreds to hundreds of thousands per cubic centimeter. They originate either from direct emissions, like black carbon from combustion – or they are formed directly in the atmosphere when certain gas molecules form a cluster which then can grow by condensation of other gases”, Boy describes.

In the atmosphere, aerosols influence the formation of cloud droplets. The more aerosols there are, the more cloud droplets there will be – and smaller the size of the droplets. Smaller cloud droplets will have a longer lifetime than bigger ones as they have a lower probability to grow to the size of a rain droplet and precipitate. Hereby they will affect the amount of radiation reaching the surface of the earth and have a cooling effect on our climate.

That doesn’t mean small is always good: for example, in urban areas the tiny particles from emissions can penetrate our respiration system and cause severe health problems. Michael Boy’s perspective is in the large picture:

“Currently we apply different techniques from machine learning and artificial intelligence to create and solve complex atmospheric chemistry schemes and aerosol dynamics. The focus is to tackle certain chemical systems that haven’t so far been included in atmospheric chemistry models but have crucial impact on the aerosol formation. Secondly, we want to create neural networks for combined chemistry and aerosol dynamics. This neural network could later be applied to regional weather forecasts, as well as air quality and climate predictions.”, he says.

Big goals are needed as the problems are big too: global warming and pollution are constantly in the news and for a good reason. As different actors seek solutions for these global problems, a better understanding of what’s going on in the atmosphere is much-needed information outside academia too:

“To provide valuable recommendations for political decisions it is crucial that we achieve a complete understanding about the aerosol formation processes and the complex atmospheric chemistry. Only in this case we can be sure that the decrease of emission of one compound will not have unwished negative feedback on the concentrations of others”, Boy describes.

Working for two universities and regularly visiting three cities – Helsinki, Lahti, and Lappeenranta – might sound intimidating to some, but Boy tells things have worked out surprisingly smoothly. Previous career at University of Helsinki means he already knows INAR inside out and it turns out he is no stranger to Lahti either:

“As my wife was growing up in Lahti, we visited this town many times before we moved to Finland in 1998. So, when I started the new position, I already knew Lahti for decades and had very good memories – especially of the Lahti Ski Games which we joined several times. We still have very good friends in Lahti and visit them quite regularly, which means now with an office in Lahti, there are even more reasons to come here”, he tells.

Boy describes the atmosphere in LUT University being welcoming and warm since his first visit as well. The interest of LUT researchers in combining knowledge from different scientific fields to tackle complex problems has been visible. After four months a fundamental understanding on the research of each other on atmospheric modeling and computational engineering has been established. Things are proceeding much faster than Boy had considered beforehand.

Besides research, the near future holds quite a few activities in Lahti for the professor. He brings students from both Finland and abroad to Niemi Campus by organizing two workshops before the end of the year and a summer school in June 2023. He is also a keynote speaker in the biggest annual science event in the area, Lahti Science Day.

Professor Michael Boy: Atmospheric Aerosols and their Impact on Climate and Health. Lahti Science Day, November 24 at 12.30 PM. Auditorium 1, Mukkulankatu 19 Lahti. The event is free and open to everyone. More information: www.lahdentiedepaiva.fi